<This tutorial was last updated in 2015. A new and better version (2018) is out, also including arbitrary heights for the target. click here>

In this tutorial, I’ll demonstrate how to implement an example of simple trajectory motion in Unity3D. In our scene, we will have a plane and a cube. The cube will jump to a target position that is randomly assigned on every jump command. The calculations will be based on an initial velocity and for simplicity’s sake, the projectile will land on the same height as its origin. The whole tutorial can be found on my public GitHub repository.

We will practically calculate the initial velocity required to launch the cube with a given angle to the target position. Let’s begin, shall we?

1 - Setting Up the Environment 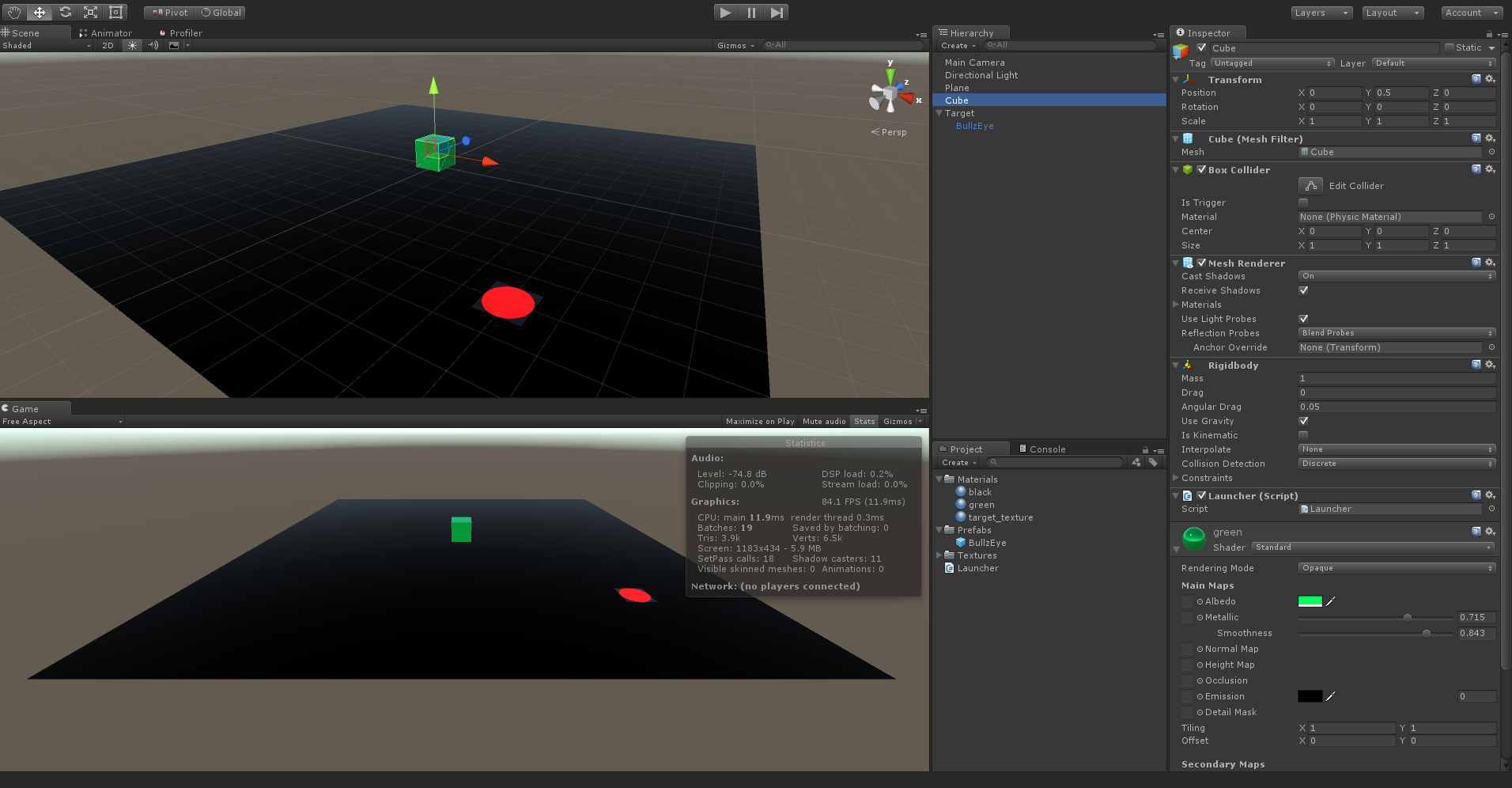 On the next step, we will implement acquiring a random position from a target pool, and then place the Bullseye prefab on the target. Here’s the code without the function implementations.

When launching an object to a target position with a given shooting angle, it is quite handy to use local space vectors when defining the initial velocity vector. Unity has a great function for transforming a local direction into a global direction – TransformDirection(). Our approach will be quite simple:

Turning the Object and the Local Space

First, we will make the cube face the newly acquired target position.

When the coordinate system is changed from Global to Local from the editor (second of the Toggles near the basic toolbar) you can see the blue Z axis is coming out of the cube and turned to the target position when we call the LookAt() function. You can toggle between local and global space to see the different axis orientations. 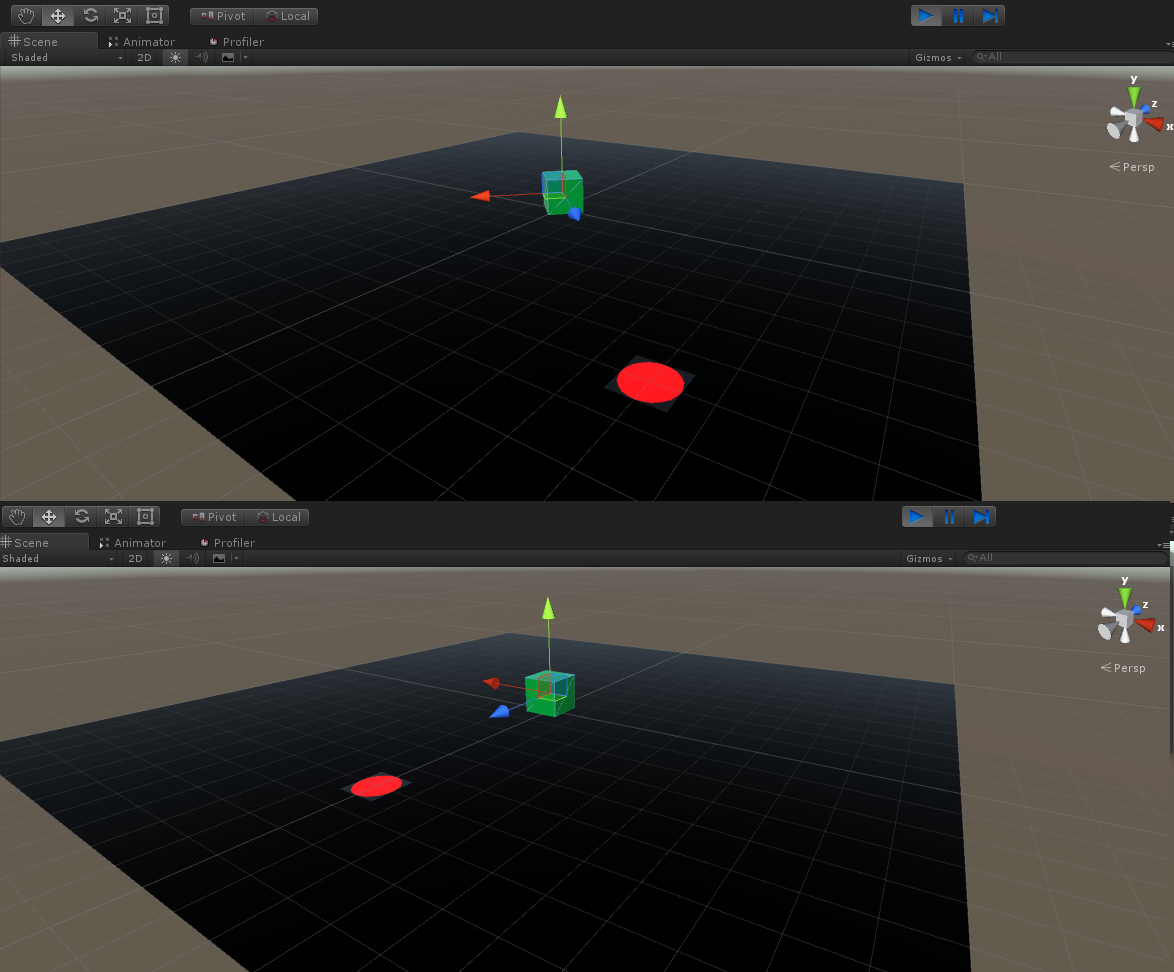 Cube facing the target as seen in Local Space

Turning the cube to the target using LookAt() function will come quite handy when calculating the required initial velocity for launching as it will reduce the problem to a 2D space, so we can accomplish the trajectory motion by only calculating the local Z and Y components of the intial velocity. Before we do that, let’s have a look at the physics!

Below is a depiction of a trajectory motion. 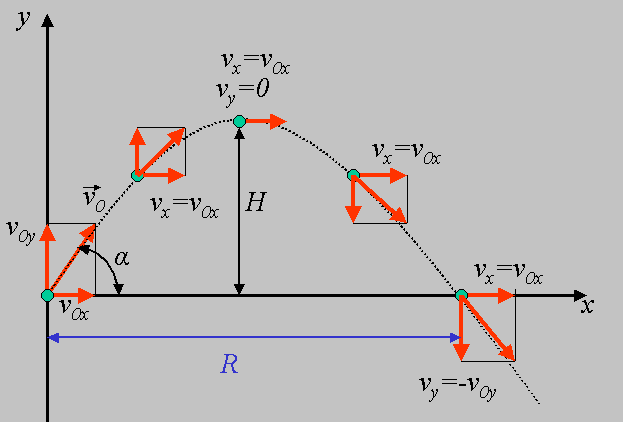 Analyzing the initial velocity we get the following equations:

Let’s say this motion occurs over T time and the gravitational accelration is G. As the horizontal velocity V0x doesn’t change over time, we can see that

At the time T/2, the object will be at its peak point. The horizontal distance H will be traveled by the object during the remaining T/2 time, with V0y = 0 and with an acceleration of G. We can get use the free fall equation and get

We also know that during the half time, the Y component of the initial velocity V0y reached zero from its initial value. Applying the Velocity = Acceleration x Time formula, we get

Now that we have our base formulas, we can start playing with the formulas to get a useful final formula.

Using the “trigonometric angle transformation formula: half angles” and leaving V0 alone on equation (8), we finally get

We can now calculate the initial velocity, since we know all the unknowns:

Lets translate all this into C# code. Since the Mathf.Sin() and Mathf.Cos() functions take angles as radians, we will need some conversions – i.e. will use Mathf.Deg2Rad for that.

There we go, our cube jumps to the target! 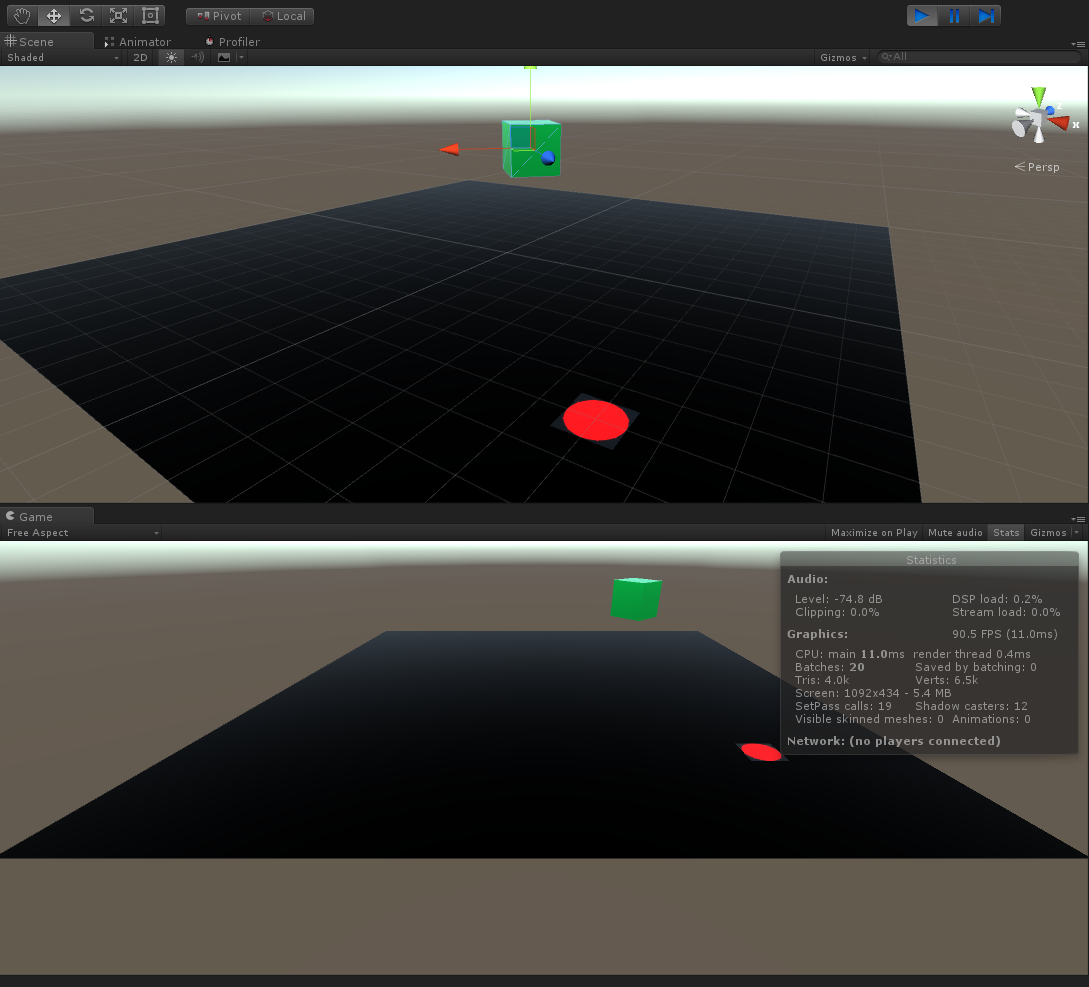 If you are shooting objects like arrows or missiles, you’ll need to rotate them mid air to make it look like a real arrow or missile trajectory. To demonstrate what I mean, I’ll use a capsule to launch, instead of a cube. 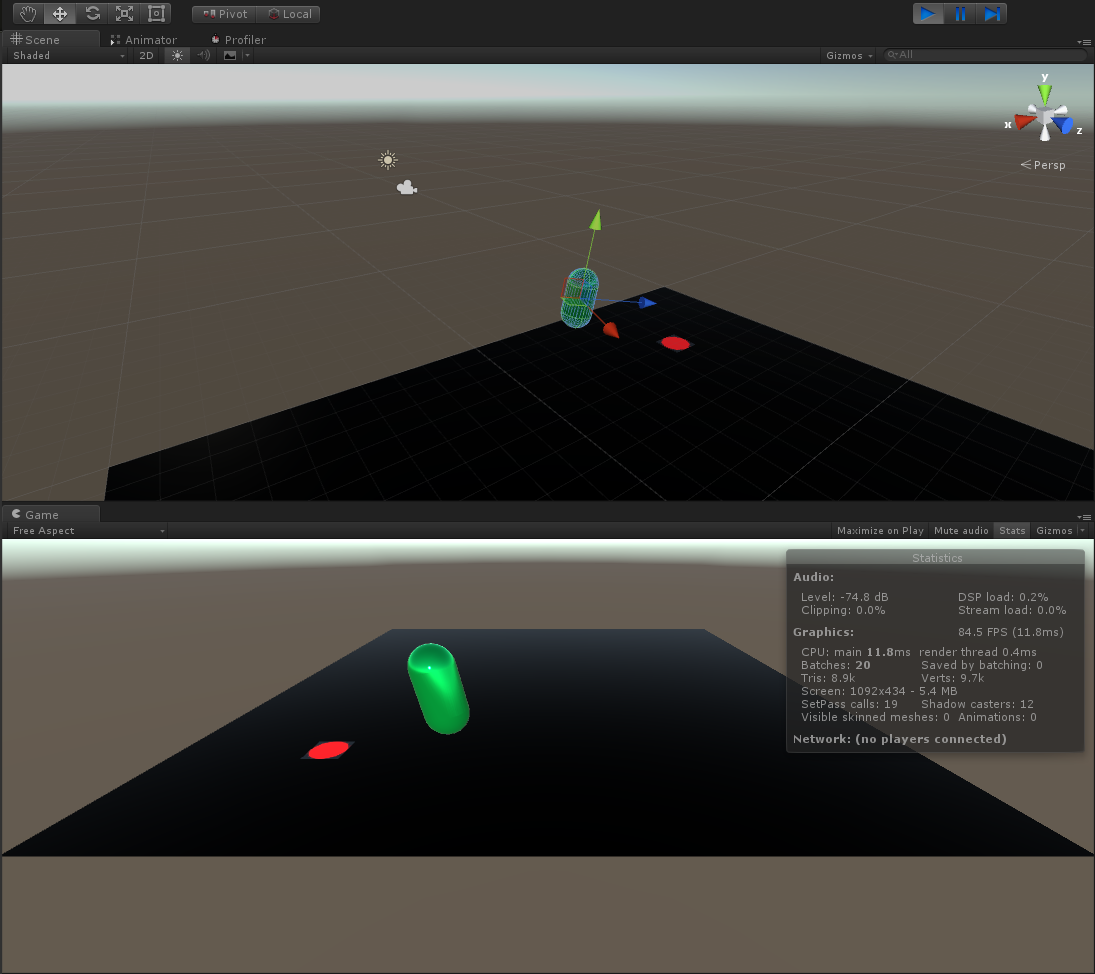 As seen here, the capsule is launched with the rotation returned by the LookAt() function and it keeps its rotation during the trajectory motion. This is the “NO” scenario below.

To rotate the capsule to give it a more realistic look, we will create a new script named “Rotation.cs” and rotate the projectile during the course of trajectory motion.

There is one more arrangement to be made. To use the capsule like a missile or an arrow, we need an initial X rotation of 90 degrees, i.e. the projectile must be parallel to the ground as its initial orientation. Otherwise, the capsule will act similar to the missile in this scenario. To mitigate that,

There we go, a more realistic launch! 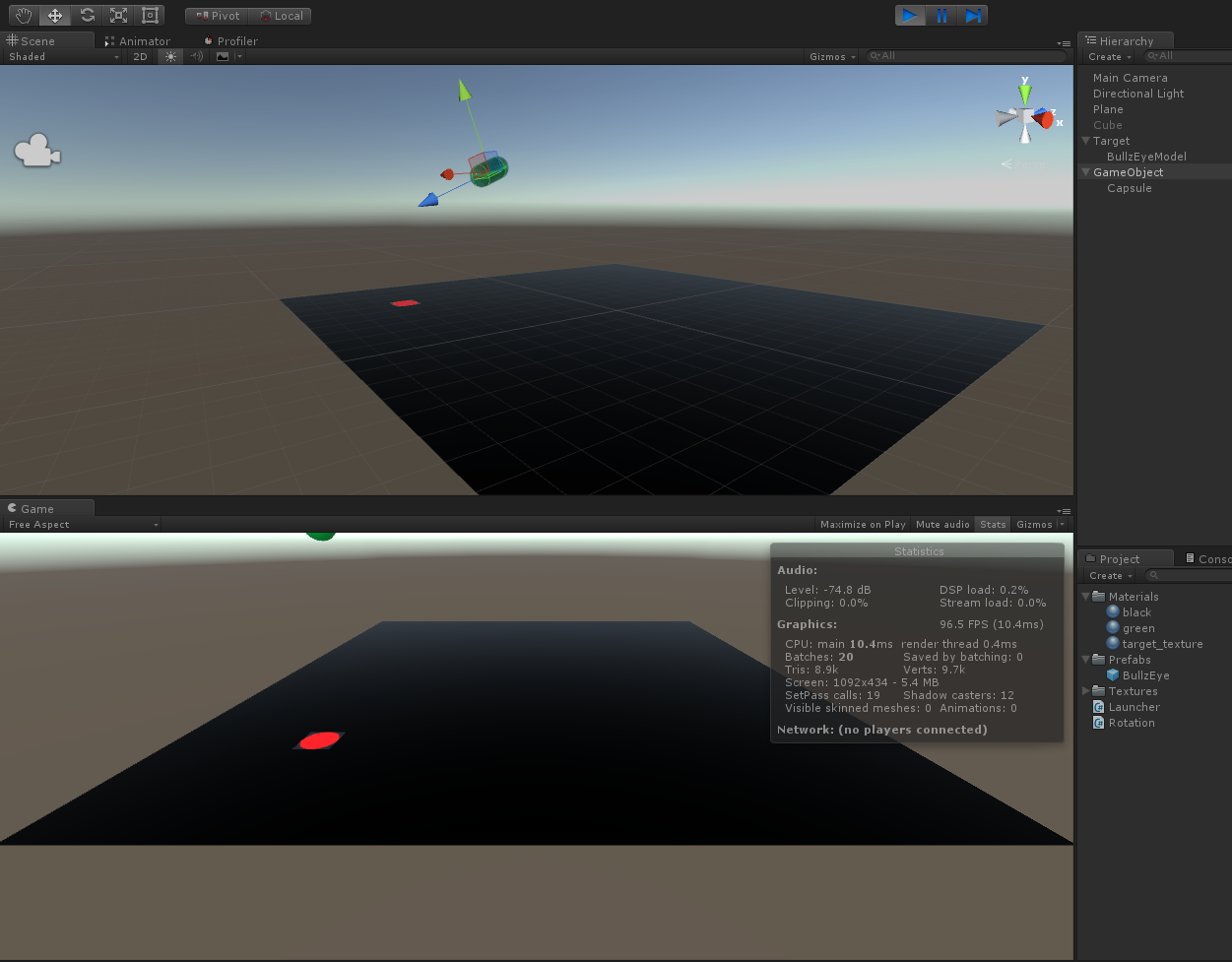 See it in action on WebGL here.

Thank you for reading this tutorial! If you have anything to add, questions or feedback, please leave them as comments below.